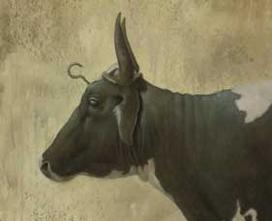 B. A. History of Art and Professor in the ISA

Just at the moment when Dalí "popularized" extravagance, surreal nonsense became part of the collective memory of the twentieth century. Those who would not tolerate the excesses of the Spanish artist at least knew that something was brewing; finally the genius of all Dada’s predecessors was known and/or understood by few... too radical. Let’s remember: "If God may not succeed, so Dada"[1]. But surrealists, beyond the phobia of certain bourgeois of that time, painted so hopelessly well that eventually convince the wisest of mortals and that art became another one and the best-worst of all was that there was no reverse.

So if Yaumil Hernández paints bordered with the surreal in the XXI century in the least one can think of is outmoded in a pose, because Bretón alerted "to see how this madness has taken shape and has lasted"[2]. We must not be surprised if the interest in subverting reality continues to haunt more than one, regardless of space/time in it has played there.

And to top the artist lives on an island where a great intellectual immortalized what is known as magical realism, his creations are not to be merely an imaginary sequel to the European avant-garde dream. Rather, it fulfills prophecy as a kind of Carpentier's legacy, "our magical realism, is the one that we find in a raw state, latent, omnipresent in all Latin America. Here the unusual is commonplace, everyday has always been".[3]

The obsession for amorphous, childish and amazing elements was a part of Yaumil Hernández’s speech that he invented from his beginnings as creator in order to deploy a host of fantasies that does not belong to its surrounding reality searching an art to put his finger on sore spot of the national fissures. His palette rather proposed the freshness of chimerical, an insistence on a prolonged relaxation, and a disconnection of the reason that comes from the delights of the unthinkable.

Hence, the first series of his career moved in a constant intertextual game with the art history ranging from the superposition of configurations of Renaissance halo to some flirting with Botero's fat, passing through the some veiled nod to Chagall.

So when painting a field he could not ashore. Allá nacen los artistas (The Artists born there) is a tribute to Calle 10, Reparto Chivás, where he was born, nothing more and nothing less than Guanabacoa, one of the most syncretic zones of Cuba, where the unusual is commonplace, rather than daily. The Artists born... is a sort of region suspended in the air, a real landscape that becomes fiction, a pipe dream.

In this form Yaumil was creating the way to prepare El Truco y la Forma (The Trick and the Form) (2010), title of Yaumil Hernández’s last personal exhibition at the gallery Rubén Martínez Villena of the Union of Writers and Artists of Cuba (UNEAC). This left a clear attachment to the curriculum of Yaumil: being a disciple of the Cuban painter Arturo Montoto gives him a special mark as can be for the career of any artist —no matter the discursive lines— taking into account that the Montoto’s art is recognized as well as his intellectual clarity. So the pieces of The trick and the Form outstand for his excellent workmanship and because of the emergence of a conceptual speech, although it emerged from the earlier works of Yaumil, he visualized it clearly as a turning point.

The truth is that his insistence on a prolonged relaxation led the artist to make endless fables that has "softened" toward an interesting formal synthesis that replaced whimsical imaginary landscape by neutral backgrounds. Sobriety is imposed on the form but the trick is more/less the same: the improbable as an epicenter without realizing the fake or quirky.

As a sort of disused factory, Hernández displayed on the canvas a group of artifacts dilapidated, decayed by time in total contrast to living bodies no less contorted and uncomfortable. Error de redundancia cíclica (Cyclic Redundancy Error) is imposed as the piece that shows us "the device" in a complete way. A kind of submarine and pipeline at the same time with clocks, keys and ducts that communicate one to each other without arriving  to any place; that is the error and redundancy, while this useless monstrosity seems to be the parent of the other machine-men.

The same machinery that falls right in the middle of the pictorial area of Proceso Abierto (Open process) and lets the other zone to a rare indifferent character, light clothing and extremely small compared to what lies ahead. A composition referred to the inner majesty of Gothic cathedrals where the man was knocked out and would become very little, only the zero point of existence facing the divine power.

However, this does not seem to be the totalizing intention of The Trick and the Form or rather that substantial change in the work of Yaumil Hernández. The common place that tries to problematize the contemporary subject of human delicacy by contrast with the mechanical strength is not Yaumil’s starting point. He only needs to reiterate the logic of Open process: the great device ready to fall upon the impassive character. An interesting but certainly outdated phenomenon, very in tune with the sixties media fury that blown away with the robots, galactic travels, technology crossings of rare things and everything created by Man that ended up eaten and done bits, while the only survivor never saw, of course, a miserable particle of the device or the twisted nasty bug, imperceptibly, announcing the second part of the story.

Yaumil rather provides the same levels for both, each has the other, so ill is scrap as the subject. This can be testify by Ícaro (Icarus) and Mercurio (Mercury), the smoke coming out of that rare vehicle is divided, the pressure persons are supporting of seems no more than an effort to jump-start those unfinished parts that are already well as their own bodies. The captivity is shared by all; there are no victims or victimizers.

This sums it up Prótesis (Prosthesis) in a very ingenious way. It is so: a replacement for a replacement. Maybe the artist will be better in the case of a cow, a cow with a rear mechanism that opens and leaves a little pile milk. But it is obvious that everything becomes complicated with the subject/object because the man has a symbolic meaning impossible to ignore and if they were only prosthesis, why do the artist call with so suggestive titles as if he would try "to complicate the thing" in a text like this?

Here the cow, Mercury and Icarus have its own weight, half real and half-steel, Chagall, Botero, Breton and Dalí hanging around, Regla[4], Guanabacoa and Carpentier of course: "the surrealists often obtained wonders interplaying with the elements. I argue that in Latin America the wonderful elements found in its purest form, just around each corner (...)"[5].

[4]Name of the Municipality where the artist is living currently.